Those looking for their Forever Homes can now be found HERE 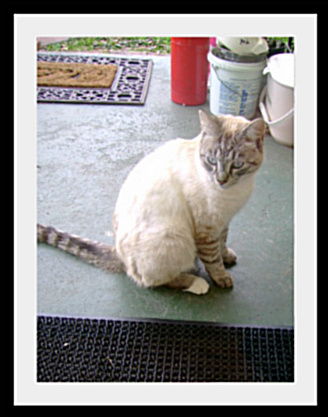 Let me tell you a little bit about Smokey.  Smokey showed up at a home in the City of York in December 2011.  The wonderful folks who live there are animal lovers and they tell us it is very common to see animals pass through their yard.  One day in December they spotted Smokey stocking a Mole but think think that much about it.  Then in January they noticed their inside cat watching Smokey as he busily made himself a little nest in some weeds so as to catch a mid-afternoon sunpuddle.

Then one night the gentleman of the house called his wife from his cell phone to have her take a look outside in the driveway.  Smokey was interested in getting some attention and perhaps some much needed help.  Well after that initial contact handsome Smokey began to hang around more and more and the humans decided it was time to put out some food in case he wasn’t getting fed elewhere.

Since he was spending so much time at their house they decided to take him to the vet to determine his gender, age, and see if he was micro-chipped (which he wasn’t) and to get his shots etc. This is when they found out Smokey is FIV+.

The moment you touch Smokey he starts “making biscuits” or kneading.  The vet  says his overall health appears to be good.  She gave him a shot of Depo Medrol for dermatitis, which she thinks was caused by fleas and they have treated him with Advantage for fleas.  He has also been treated for worms.  He was so sweet when they took him to the vet.  He laid on the table and let them scratch his belly and purred loudly.  He allowed them to clip his nails with no problem and only cried a little on the car ride there, which is totally understandable.

Since returning from the vet they put a collar on him with the rabies tag and none of their neighbors have called to tell them that he belonged to them or ask why they took their cat to the vet…..so still no owner is stepping out and claiming this beautiful creature.  He  belonged to somebody at some point because he is neutered, loves humans, and is totally handsome and looks very similar to a Zeus Seal Lynx Point Siamese.

He is incredibly friendly…loves to be petted…wants to come inside so badly he can’t stand it and due to his FIV+ status they are heartbroken that he can’t come in.

Won’t you please help us spread the word about this handsome boy and help him find the home and life he deserves?

Tested positive for Feline AIDS and vet suggested that he be kept inside and isolated from other cats. Said he will probably live a long life with good care.

If you can help, please email me a brianfrum (at) gmail (dot) com.  Transport can be available if necessary.

Oh, I do so hope someone decides to take little Smokey into their hearts and home soon. He looks like a wonderful lad. No, that’s NOT a tear in the corner of my eye. No, it’s NOT!

What a cute little guy! I hope somebody can take him.

Smokey sure is a great little guy. We hope someone gives him a loving indoor home that he so deserves.

Oh goodness. We are so sorry they are not willing to integrate him with their other furries. It is a hrad decision to make, one that Meowm had to make with Sammy, whehter he should stay or go, but she hasn’t regretted keeping him. We will be purring our hearts out for someone to take Smokey and give him the loving furever home he deserves.

We has our paws crossed he finds the purrfect home soon.

Whoa! Poor little Smokey! I hope he finds a home. Peeps found our Nicky on the porch. He just came up to Pop and started rubbing on him and talking. They took him in a few days later. Just like Smokey, he must’ve been someone’s cat at some point. Wonder he Smokey’s folk knew he was FIV+ and that’s why they threw the little guy out.

Smokey is gorgeous and it’s a good thing he’s not in New York or I’d bring him home. We brought FIV+ Domino into our home and it’s no problem. Vets and rescue organizations alike accept the view that FIV is transmitted principally by bite wounds, which allow virus in the saliva of infected cats to come in contact with the blood of an uninfected cat. While aggressive encounters between newcomers and cats in an established household are always a possibility, actual fighting-with-biting between cats in a stable, “friendly” group is rare.

Oh isnt he a beauty! I hope he finds a home soon!

Brian, I’ll post this info about Smokey on Pet Blogs United this Friday, unless I hear from you not to.

purring someone’s taking him home soon. such a cutie, deserves a home.

Awww lovely Smokey!! We hope you find a good home – you are one handsome unique boy!! We shall purr and pray someone falls in love with you asap! take care
x

Awww situations like that just break our hearts. Poor kitty – sounds like he was someone’s pet. I do hope he finds a new home soon.

Smokey you are very sweet.
We hope you will find a nice home.
Many Purrs for you and little Brian
With love from
Pepi, Xixo, Juja and Jujuba

He’s beautiful, I hope someone will open their heart to him!

He looks such a sweet boy. We hope someone will give him a home.

Oh, beautiful Smokey. I do hope he finds a home. He doesn’t look like my daughter and son in law’s Smoky, who is a Maine Coon, but the name reminded me. Their Smoky is well loved and taken care of. That’s my wish for this Smokey too!!

Smokey is very handsome. Our paws are crossed for him and a forever home.

You are very handsome, Smokey. Hope you get your forever home real soon.

Smokey sounds like a great cat. Big purrs and prayers that he finds a forever home soon.

Smokey sounds wonderful. FIV cats can live long and healthy lives. Hopefully, someone will give this handsome kitty a chance.

We pray some understanding, loving, perfect forever someone sees Smokey’s story and gives him the cared for life he deserves.

How heartbreaking! We hope someone comes forward soon! If only we weren’t full. We’ll be purring he finds a home soon. Bless everyone who have helped him out.

We hope Smokey, who is drop-dead gorgeous, will have a new loving furrever home very soon! And Brian, we hope your liver enzymes are back to normal on that up- coming checkup. Purring for you both.

What a sweetie!
xo Catherine

Brian – Mom knows someone who might be able to take Smokey. She will contact her. The lady lives in NC and she fosters/rescues kitties and has dealt with many FIV kitties. We will give her your email.

what a sad story for Smokey-I hope he finds a home.