I hope y’all had a really good weekend, we sure did. Well, most of us did anyways. Sister Gracie got a gift and she was not overly amused. You might remember that Sister Gracie is on a diet, and as diets tend to go slow, I thought I’d get her something to help her.  So, the man in the brown pants showed up with a box for Sister Gracie.  It was a scale so Dad can weigh her on a regular basis.  Oh, she wasn’t too happy but she did sit on it and get weighed.  Maybe she won’t be mad at me for too long.

Do you remember this pretty girl? Yes, it’s Scuttles!  Scuttles went to her new home on September 12th.  Then we got a new follower on Twitter and the name was @ScuttlesMom.  Needless to say we were thrilled.  Scuttles Mom joined Twitter to be able to keep in touch and we got the following message:

@Brian106sc Scuttles is so amazing. I am so glad that I found her on your blog. She is separated from my 2 kitties for now, but doing great!

So, if you are on Twitter you might want to follow her and give her a shout out.  Many of you helped spread the word about Scuttles and I’m sure she would like to hear from you. 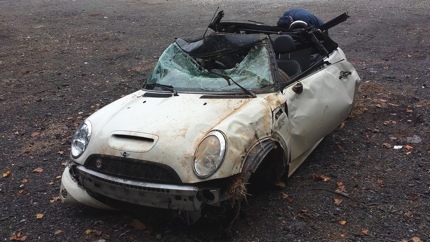 Yes, that car looks horrible and it’s the result of an awful crash that involved one of our pals. If you are not on Facebook you might not know this, or if you are on Facebook, so many things are easy to miss.

Most of you know our dear friend Selina from One Eye on the Future (also home to Ray Charles and Sister Rachael).  This car belonged to their DadKatt who was in this most awful crash and had to be cut out of the car.  He had a lot of injuries but DadKatt Gary is home now, but it was such a scary time for them.  They haven’t updated their blog for a while but I know they would love to hear from you if you want to stop by as send some healing wishes to the DadKatt.

Affiliate Disclosure: Sometimes I use affiliate links. What does that mean? It means that if I’ve used a product and liked it, or it's a company I buy from and trust and they have affiliate programs, I sign up. Then, when I mention that product or company in one of my blog posts, I use my affiliate link. Should you end up buying something as a result of one of those links, I might get a little sumpin’ for my treat fund.

48 thoughts on “Mancat Monday: A Couple of Things You Might Not Know or Didn’t Remember”