Hello everyone, its me Dolly and I always enjoy when it’s my Saturday to do a post.  It’s a lot of fun to do and even more fun to see Brian sitting here wondering what I’m going to write about and if I’m going to say something about him.

It has been somewhat of a busy week and Kitten-TV has been going strong.  I like watching the kittens too but in the last couple of days I’ve been a little preoccupied.  You see, Brian told me the other day that my BFF Savannah from Savannah’s Paw Tracks is up to something and he was trying to figure out what was going on.  That’s not unusual that Brian couldn’t figure out what’s happening, he’s a boy after all.

You may not know this about me but I have some pretty keen investigative skills.  Brian, what?  Brian!  Brian says they aren’t investigative skills, he said I’m just nosey.  So, I decided I’d do a little snooping and see if I could figure out what Savannah is doing.  I went to her blog and sniffed around, but there really wasn’t anything unusual there.  So what’s an investigative kitty to do?  Of course, a Google search.  WRONG!

I did a search for Savannah’s Secret, well, that sure wasn’t it, and apparently that Savannah has a sister named Victoria, who also has some secrets, and some strange looking clothes.  Maybe she is moving because the next search I did took me some place in Georgia.  No, that’s likely not it, I don’t think Savannah would be moving, although she is a mover and a shaker when it comes to helping other critters. 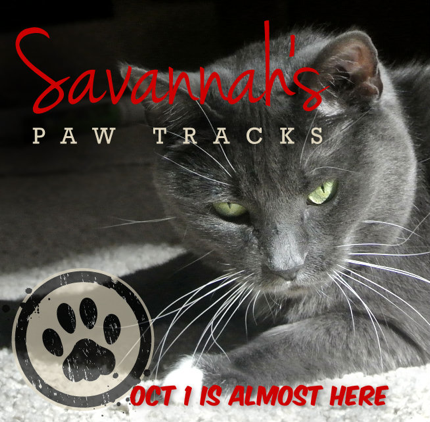 Savannah is up to something and it’s happening October 1st.  You would sure think there would be some catnip crumbs and some clues around somewhere.  Hey, maybe the kittens know!!!  I’m going to go ask them.  Catch ya soon!

Oh, I want to know what is going on at Savannah’s too!

Sweet Dolly you sure have been busy investigating..we are all very curious to know what Savvy is up to..and we still have a bit of a wait…hmmmm what could it be?? even my roos know something is up 😉 whatever it is I bet it will be very interesting and keep us all on our toes 🙂 loves Fozziemum xx

Guess we will all find out what Savannah is doing on Oct. 1st. Wonder if she is moving. Maybe a new sister or brother. But good job investigating Sister Dolly. Happy Saturday to all of you.

Sister Dolly,
My dad is always say girls do the best job for investigation !
This post proved the point !!!
Happy weekend 🙂

I have no clue, you kitties always baffle us dogs!

Dolly I’m curious too… do you have any idea what Savvy and The Kid plan for the best month of the year?

That Savannah is really good at keeping secrets if you couldn’t even sniff out a clue, Dolly!! It won’t be long until we all find out what she’s up to 🙂

This probably doesn’t have anything to do with Savannah’s plans, but here is a list of “Historical Events on 1st October”. https://www.historyorb.com/events/october/1

Ron & I have been to Savannah, GA.

We don’t know what’s going on – fancy Brian saying you are nosy Dolly when he wants to know what Savvy is keeping a secret!
Luv Hannah and Lucy xx xx

Dolly all of us here can’t wait to see what Savvy is up to on Oct. 1st either! Brian wasn’t very nice for calling you nosy though!
Marty

Can’t wait to hear about Oct 1!

lol yeah lord google sure gave you nothing there. Although I bet the clotthes would be fun to chew up.

Heh…heh…Sister Dolly…you are indeed a very investigative ladycat…Brian doesn’t realize how snoopy, I…ahem…mean inquisitive we ladycats are…*whispers in Sister Dolly’s ear…hop in your teleport tunnel…come on over midnight Sept 29 and I will tell you first *

Savvy won our last giveaway so I do know she’s on a vacay but that’s all. I can’t wait to find out out!

Let’s all get snooping to figure out what happens on OCT 1st.

Wow Dolly! Yous is a super star sleuth!! Mes has a job for yous…Mes likes to plays with socks and they keeps disappearing in the dryer…does yous thinks that yous can find out where they goes?
Kisses
Nellie

Yous be so purretty Dolly. Weez been a wunnewin’ what dat Savannah is up to owselves. Hope y’all hav a pawsum day.

MOL MOL WTG Dolly and Savannah…keeping the Brian Guy guessing. You deserve salmon for this accomplishment. Brian is a purrty sharp man cat too.
Hugs madi your bfff

HI Sister Dolly, we too are wondering what Savannah is up to, but we are pretty sure it has nothing to do with Victoria:)

I’m late reading this. Guess I’d better run over and now see if I can figure out what Savvy’s mystery is all about. Knowing her, I’m sure it’s something big.

What is that Savvy up to!! We are agog!!

OH my goodness! First however, Sister Dolly you are gorgeous but I think I told you that before. I will see if I can guess Savannah’s secret and let you know.

Dolly, I CANNOT believe that Savvy hasn’t even told her BFGF, me! She knows I can keep a secret but, no, she apparently doesn’t trust me. I may have to strip her of BFGF privileges.

Now you got us wondering what’s going on with Savannah.

You have me Savannah curious now.

Dolly, we must say that you obviouly have not asked the right kitties. Just saying…you might know a certain eight cats who could know something. Mol! Mom has told us we better keep our lips zipped. XO, Kitties Blue

Hmmm… what could she be up to?! We will anxiously be awaiting October 1st.