Before I start, I told Sister Gracie that I would tell you that today is the actual anniversary of her dear Alex leaving for the Bridge.  Gracie is still a little upset with the Dad for posting her letter a month early.  If you missed her post you can read it Here. Please stop by Alex’s peeps place at FeelingBeachie.com and leave some hugs for Mom Hilary and Dad Marc. 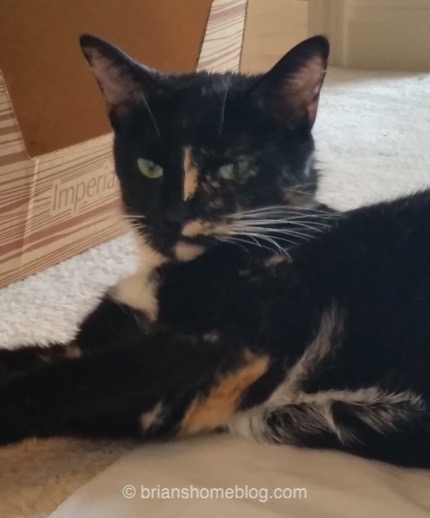 Howdy all!  Some humans always say they’ve had a change in plans, but me, I’ve had a change of channel.  I’ve asked the Dad to change my TV channel and of course he obliged.  You see, my TV is hooked to something called an antenna so my channels are somewhat limited.

For those of you who have been around with us for a while, you might recall that I like to watch football games.  But it’s not football season, nope.  So, the other thing I like is westerns, mostly because I like seeing the horses run.  I’ve been watching a channel called Grit-TV, but lately it’s been getting on my nerves because of all the barking.  Yes, barking, horses don’t bark, at least none that I know of anyways.

You see, they have been showing old episodes of Lassie almost all morning long.  I didn’t know Lassie was a western, seriously.  Now, don’t get me wrong, I don’t mind dogs, but I never realized how much Lassie barked.  I hear barking I run to the window, and see nothing.  Bark, bark, bark.  So, I tried some other channels and right now I’m back to game shows.  Some of the answers those humans give are just not too bright.  I tried a sci-fi channel but the aliens there were way too noisy as well.  I think I need a better antenna and more options!

That is for me from the Upstairs Penthouse Suite.  Have a fun Saturday everyone!  Remember, adopt cats, we deserve it!!!!!  More Forever Homes More Often!  Purrrrr! Zip! Later!

Precious, it’s the same, old story – a billion channels and nothing to watch!

Oh Precious, you made the Mom giggle. She has the same TV programs and sometimes it is so bad but then better than nothing. Lassie does bark a lot and I bet that is scary. The games shows are kind of fun. You all have a great day.

lol Lassie sure barked a lot indeed. Gotta watch those probing aliens too. So you like the game show dings?

I agree running horses are great to watch… even with the scary noises the humans on that horses sometimes make :o) Hugs to Gracie, we always remember her Alex and a good caturday to you all.

I remember TV antennas. 🙂 I hope you find something good on TV, Sister Precious…good to see you again!

Morning Precious….you look very lovely today.
Did you watch the tennis on the TVeees or the Tour de France….those bike wheels are fun to watch
Hugs madi your bfff

Happy Caturday, precious! So many things to choose from to watch!

Sister Precious! You made my DAY!!!

Hi there Precious. I’m a dog, but I agree…barking dogs are annoying. We rarely bark. If we make noise we howl which Mom says is better than barking. Hope you find a good show soon…maybe the cartoon channel has Garfield or something like that.

Sister Precious, you need to get a satellite dish. With that you can get animal planet and everything!!! Tell your bro Brian that I appreciate his kindred thoughts re the pee wars!! xx

Precious, we hope you can find some good TV to watch! We don’t even have an antenna, so not much TV around here. We do like to watch the birdies outside though.

Neighs, gorgeous Precious! I wish I could hook you into a channel where you would get to look at my studly self all day long!

Precious, you’re so cute! I think you need one of those six hour John Wayne discs for when the barkybarkbark drives you crazy!

Sister Precious, it won’t be long before all that football returns to your screen. And yes, Lassie was a bit of a barker. That’s one nice thing about us, we don’t bark very often or very much. But we sure do love to sing our woos!!!

Katie Kat and Katie Kitty Too

Hi Precious – I’m with you on the football game watching – I love all those little peeps running around. Westerns don’t do it for me – they aren’t riding horses all the time or I’d probably like to watch it. Tennis isn’t bad either!

Oh Precious, furst off we wanna say how bootyful you be lookin’. It does sound like you need a better antenna. Or maybe one of those boxes ya’ hook up to and get just da channels you want. Like we know anythin’ ’bout those boxes. MOL Anyways, all dat barkin’ would get on our nerves too. Good luck findin’ somethin’ good to watch. Raena luvs teevee, maybe she can give ya’ some suggestions. MOL

I hope you find a better channel to watch, Precious.

You need a Netflix subscription 🙂

Try the golf channel. I love watching the little white ball fly through the air and then bounce around. Sometimes I try ta catch it, but that is not allowed. ~ AYLA

You mean there isn’t a Horse channel? You gotta complain to your cable company, Precious.

That Lassie is cool for a woofie, but too much barking is just not cool! We hope Mom and Dad can help you find a new channel, Precious.

Precious, I completely agree that barking dogs on the t.v. are very disturbing. Maybe you can just push the mute button.

I think you need an old fashioned VCR with some kitty videos. I’m sorry I almost missed your day. TW gets real busy on the weekends with Pop home bossing us both around. Don’t worry. I bit him today.