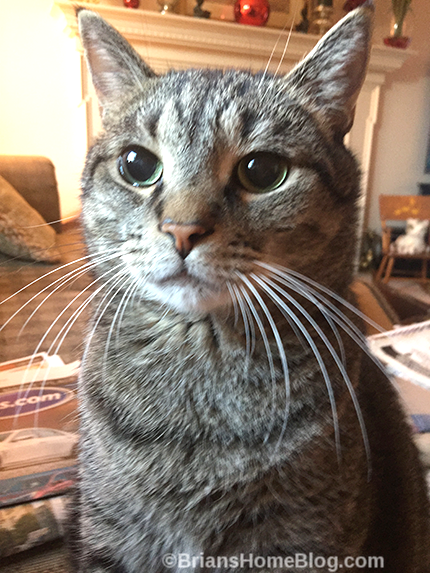 That mancat would of course would be me!  My Brother Simon isn’t quite a mancat yet, he’s a boycat, and a nice one, and of course he already recognizes that I’m the mancat.  In case you were wondering, we’re getting along just fine.  I get along with most everyone though.  Mom says I have some serious mancat whiskers.

This week I’m going to show you some more of the newbies, mostly Brother Simon, there’s a hint there.  I asked my sisters if they felt I was ignoring their blog time and they said let the newbies go for it.  They were pretty happy to get a flashy box break.

Speaking of the newbies, Dad says we’re still taking it nice and slow, but they actually do great when the door is open and the gates are not up.  I guess we don’t want to push them too much since they are doing so good.  We’ve been mixing it up between gate time and open door time and of course I’ve had to saunter back into the big bedroom and check things out.

I’m pretty happy about having a brother and I’ve told Angel Ivan thanks several times.  I think he sent me a good one! Remember, adopt cats, we deserve it!!!!! More Forever Homes More Often! Purrrrr! Zip! Later!

Brian, you are indeed a pawsome Mancat.
Simon is lucky to have a brother like you.
We agree that slow is the way to go with the newbees.
Purrs Georgia,Julie and JJ

So glad that you and the newbies get along Brian, but we aren’t surprised. We are excited about seeing more pictures of the newbies. You all have a great day.

of course you are the mancat…. and you have a brother now… it’s good to have another boy on your side, so you can share boy-stuff and secrets :o)

You will always be the mancat of the house

Should be fun to see them out and about with you. Big whiskers indeed at your zoo.

Yay! TWO days in a ROW! You do all mancats proud Brian … and we’re sure Simon will flourish under your watch. You are such a handsome, handsome mancat … from those eyes to your whiskers … to your nose … to your sweet personality.

You will all be together all the time soon, we can tell.

You’re the mancat, he’s the boycat! But it wont be long before there are two mancats, you know! Kittens grow fast! We’re so glad you get along with them. Big smooch just for you!

Brian you are the PURRFECT gentleman for those “newbies” to learn from!! And…YES your Mom is right, you DO have some “serious whiskers!!” xoxo

oh Brian, this is music to our ears. i knew ilf anyone could make it work, you and your family could. So happy for all of you.

We always love to hear about new kids fitting in so well!

We are so glad you are all getting along so well. Hopefully the newbies will be able to join you full-time soon. <3

We love your mancat whiskers Brian!
It will be nice seeing the new cats and learning more about them.
Elliot and Cricket x

It’s wonderful you are getting along well! Looking forward to read more about new kitties and I hope your sisters enjoy flashy box break 🙂

Are your parents going to re-name Simon, Simeon?

A fine photo, and those are indeed impressive whiskers.

Awww, that’s great to hear, Brian! Good to see you and to hear you are checking things out with your boycat brother. Our Mom always says not rushing things is the way to success!

Brian, your whiskers are absolutely AMAZINGLY, swoonly mancatly to be precise!

Looking forward to seeing ore of the newbies.

Yep, it sounds like you got a good one!

You da man Brian and you always will be!!
Hugs madi your bfff

You are so sweet Brian, I am glad things are working out so well.

Brian, you are truly a handsome and intelligent Mancat. Love the blog header showing your big family. You look like a fun bunch.

A great way to start the week with a super pic of you, Brian. And we look forward to more of the newbies – we love all the Sisters but we know they understand.

Oh Brian, dat’s pawsum. And by da way, you are indeed one handsum mancat with some amazin’ whiskers. Raena says to tell dat Simon, meow. Me thinks she might be a little smitten. Big hugs to all.

OMC you does has some long whiskers!! I am so glad efuryone is getting along 🙂

We are glad you are happy with your new brother, Brian. It has to be nice to no longer be so outnumbered by all of those sisters, lovely as they are!

Brian, you will always be the #1 Mancat there. But you do have a very important job with little Simon and his mancat in training.

You’re such a good big brofur! We can’t wait to see more of the newbies!

I, for one, can’t wait to see pics of you and Simon together. I’ll bet you can snuggle good.

We’re glad things are going well with the newbies. Brian, you are one handsome mancat.

Brian, that picture of you has us swooning! around here, a cat’s gotta get into mischief to get any blog time and the boycats tend to do that more than us girls 🙂

We’re glad you finally have a brother and that you go well along together. We’re looking forward to seeing more Simon. Purrs

GORGEOUS!!! You have one of the best lookin’ families… EVER!!! purrs

We are very glad to read about your larger furmily, and we totally support your statement about adopting cats. ‘Cuz, well, we ARE cats and we got adopted ourselves. Not a bad gig when you have a nice home and a servant who loves you. Like we do.

He is one handsome boy!

You are definetely the man in the house, Brian and with so much patience, your new siblings are around you in no time 🙂 Pawkisses for a Happy Day 🙂 <3