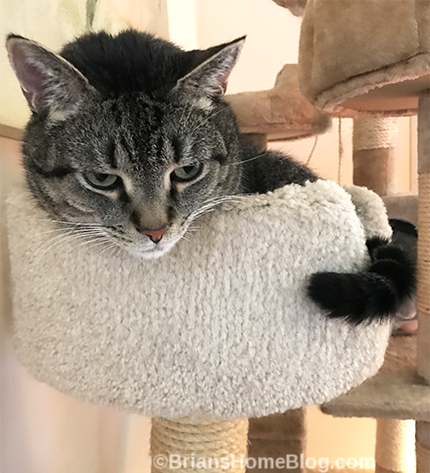 Hey, guess what I did?  I discovered a new eating place with a new yummy menu!  Well, honestly, it’s not really a new place and it’s not really all that new of a menu, but I can say that I recently discovered it.  The discovery made the mancat pretty happy and even made my tail curl.

So, what was it that this mancat discovered?  I discovered what was formerly the private dining booth of the newbies, Brother Simon and Sister Seal.  It’s not new to them of course because the bedroom door was closed for a very long time.  They know right where there food is, as would be expected.  But now that the doors open some discoveries are being made.

Let me tell you how I made the discovery.  Note that I didn’t say it was an original discovery, just that I’m going to tell you about mine.  As most of you know, I really like to spend time on the Mom’s lap fluffing up her leg.  Well, one other sister, and that would be Sister Zoe, also is a fan of the Mom’s lap.  It’s often who can get there first that leaves the other waiting.  You see, Sister Zoe had gotten to the Mom’s lap before I could get there.  So, like the good brother I am, I was waiting for my turn.  Eventually Sister Zoe was finished and was departing the lap.  As she did she walked right past me.  It happened, I smelled it, she had tuna breath.  That is one aroma that is typically not on the menu so I knew something was in the air, so to speak.  I’ll be darned, I found it, and it’s nice to have another option if my menu isn’t quite pleasing.  It’s been there for a while, but nothing like a good discovery to get the mancat whiskers grinning up.

Now that’s what we call a great discovery 🙂
Purrs Georgia,Julie and JJ

We totally agree with you, Brian! Having different dining options in different locations makes life that much more fun!

MOL! Boodie and I know where Binga’s food station is and we are always hoping to find it unoccupied.

Good discovery, Brian. What fun to have a different menu. Sounds good to us. You all have a fantastic day.

A discovery like that is sure a win. Another flavor can’t hurt.

Brian that is a good thing you discovered… much better than that what Mr. Cow-lump-us ever discovered … I’m sure…

My goodness, Brian, how did it take you so long to discover tuna! 🙂

You are so smart Brian! I’m glad you found the new dining spot!!! MOL

What a great discovery! I do love a good bit of tuna when I get it!

No matter where we are when we smell tuna, we run to the kitchen!

You look mighty cute there Brian.

T U N A!!!! Yummy
Brian that is a most handsome photo of you!!
Hugs madi your bfff

No wonder you look so glowingly handsome! Tuna! BTW, Plush CK wants a selfie with Flat Brian on the Red Carpet. We’ll rock it!

Nothing gets past you 🙂

Nothing like a nice sister with tuna breath:) We love tuna too!!!

Variety is the spice of life!

Does Brother Simon and SisterSeal still eat there at their private dining table?

How fun is an unexpected treat like that? Good for you, Brian!

Thankfully, everyone is able to be on Chloe Jo’s diet. They are worth it! xo

More dining options are the spice of life!

Tuna breath gave her away!!!! I’m glad that you found it, Brian. Bon Appetit!

MOL Oh Brian, dat’s funny. So you like tuna huh? We’ve never had it really. Oh we get the bonito flakes, but mommy doesn’t think we need to eat fish in general, so she avoids it and so do we. MOL Enjoy your tuna treat. Big hugs fur all.

Tuna breath! Good detective work Brian! You deserved that new option on your menu after all that deducing:)

We unnerstand about smelling each other to know what each other have been eating. Like sometimes somekitty has mousie-breath or even birdie breath AND DINT SHARE.

Indoor foods are differnt. Sometimes TBT gives us each a differnt flavor cuz there are leftovers. So we cant tell much from sniffin after inside meals.

Molly and my Mom @ The Fast and the Furriest

It sounds like you did indeed make an incredible discovery!! Tabby Cat discovered my Bison breath some time ago… He even snatched some out of my bowl one time. From that point forward he’s gotten to have Bison added to his menu as well. I certainly hope the same works out for you.