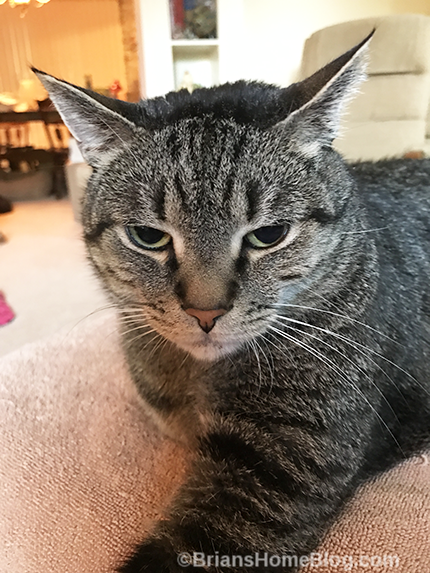 Well, it’s been a while now since the “kittens” moved in with us.  Sister Precious was right on Saturday, they are a bit big to be called kittens, but they will be in that active stage for a while yet.  Anyways, I thought I’d give you an update on how things are going with Brother Simon and Sister Seal.

Fairly normal is how I would describe it.  Most of the time they are just here being a happy part of the family.  There are still those times when Brother Simon goes charging up to one of us and some hissing happens, but those events are fewer and further between now.  Most of the time it’s by accident.  Brother Simon may go running through the dining room and not realize one of the sisters was in the pathway.  In the even of a hissy alert, it starts and is over with before you know it.  That’s a lot of progress from the earlier days.  Most of the time Brother Simon just likes laying around with the rest of us.

That sweet Sister Seal is, well, sweet.  She it venturing out of the bedroom some and has made it as far as the main hallway.  She’s even had a drink out of the big pond water bowl several times.  That;s great progress for her and we’re determined not to rush her progress.  Whenever she wants to venture out she will, at her own pace.  You may remember the photo I posted of Sister Seal drinking out of the bathroom faucet.  We’re all kind of anxious to see what happens when she comes out far enough to discover the fountain.  She will probably like that, at least we think she will.

That’s about it for me today.  Oh, before I go, did you know that some Sister has a special day coming up this week?  You won’t want to miss it.  Have a fun week everyone!  Remember, adopt cats, we deserve it!!!!! More Forever Homes More Often! Purrrrr! Zip! Later!

I’m glad things are going well with the (big) kittens in your family, Brian!

Great update Brian.
Sounds like the kittens are growing more comfy in their home and with all of the other kitties 🙂
Purrs Georgia,Julie and JJ

Good things are going grand. A short hissy face isn’t too bad haha at her own pace is the way to be indeed.

Thanks for the update on the kittens who are trying to grow up. Sounds like they are enjoying life a lot.They sure found themselves a great home. You all have a great day.

Sounds like things are going well. Have a great week.

Oh that’s a nice thing to drink from the faucet, your sister seal is very smart ;o)

Teddy is now a year and a few months old and is still acting like an 8 week old kitten……I’m not sure when “technically” they become “young adults” but Teddy isn’t slowing down yet. When we got Sammy he was not QUITE as wild as Teddy – they’re all different and do their own thing! Sounds like Simon and Seal are fitting in nicely though and learning new things every single day!

We are so happy things are working out okay with the new arrivals. If anyone can make it work, you and your sisters can Brian. Good job.

It’s been a long, long time since we had kittens around, and their energy level! But don’t let them grow up too fast.

I am sooo happy that they are thriving at your home, seriously, who WOULDN’T????

Yippee! Thank you for this update to how things are progressing there! We know how big households take time to sort out. Sounds like everyone is doing very well and settling in wonderfully.

I’ve never had a ct but the more I see my friends posting about them the more I’m thinking that one day I might.

Sister Seal, don’t you snuggle with your Bother Simon?

Oh Dear Brudder Simon is at that awkward teenage stage…fingers crossed he doesn’t get pimples too.
At least he has a Gentleman such as you Brian as an example
Hugs madi your bfff

Thank you for the update…it sounds like things are progressing well enough.

I am glad things are going well.

We are so happy that things are coming along nicely with the new additions. With just a little more time, everyone will forget they were ever anything less than one big happy family!

We luv special days. We can’t hardly wait. Dat’s pawsum dat things are goin’ well. We still have a lot of da hissy fits. ‘Course, Raena just won’t stay in her place. She just luvs to jump out of nowhere on top of me. okay, so maybe it’s not on top of me, but still. MOL “Course it’s just a hiss in passin’. Me thinks me ‘members sis Lexi doin’ da same thing to me. Even in her last days. So mommy says it’s normal and how we kitties communicate annoyance. MOL Raena sas to tell Simon, hey. Big hugs… Read more »

Great to hear that things are going so well with Brother Simon and Sister Seal. That is great that you are letting Sister Seal do things on her own terms…she is making good progress. You all have a wonderful week. Hugs and nose kisses

We’re glad that things are going well with the newbees in the house. 🙂

Great to hear that everything is going well in your household Brian. We hope that the two-leggeds are also in pink of health.

Glad you’re having a good monday!! 🙂

It’s wonderful things are well with Simon and Seal! I would love to see how Seal will like the fountain 🙂

Molly and my Mom @ The Fast and the Furriest

Life is easier when everyone grows up enough to figure out boundaries, and learns how to respect “personal space”. Sounds like things are progressing and life is getting into a routine. That is progress for the youngsters indeed.

Wow, I’m SO happy to hear that life is progressing so well for Simon and Seal. It sounds like Simon has a feisty streak (but is a very fun guy) and Seal is a bundle of sweetness!

Kittens and puppies turn into cats and dogs so fast! Seal is doing so well, we are happy for her!

Glad that you’re finding life with the kittens to be pretty normal.

Slow and steady wins the race 🙂
It sounds as though everything is going well! 🙂

hello brian its dennis the vizsla dog hay that is grayt nooz that brother simon and sister seal ar settling in littel by littel!!! i am shoor that befor long yoo wil all be kuddling in the sun toogether!!! ok bye