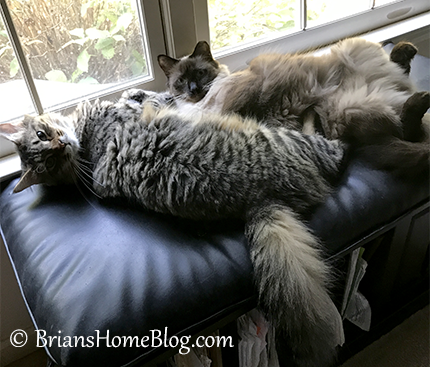 Oh, yes, the photo was back before they got evicted from the big bedroom, but we wanted to have one of them together. Since this is selfie day this is their non-selfie selfie. They still hang together and really are best buds. Simon, as you know, is the outgoing one and Seal is the shy one.

If by some chance you’re new to our blog, Simon and Seal arrived separately as lost feral kittens within days of each other. That’s when they became buds because they both were alone and scared and they decided to deal with it together. The Dad, with some help, did a TNR session and on that day we trapped and TNR’d eight kitties. Seal went in the trap early. The TNR session was about to be over and there was no sign of Simon. By golly, when the Dad went to pick up the last trap Simon was in there.

The first day they came home the Dad put them in the big bathroom to let them adjust. The Dad went outside to take out the garbage and he heard quite a racket coming from inside. Brother Simon was trashing the big bathroom, stuff was everywhere. Sister Seal, on the other paw, was scared and was satisfied just to hide where she could. To make a long story short, the peeps decided to let them both adjust on their timeline.

Now, they are both thriving, and they both love attention and brushing and will purr up a happy storm. They really have made tremendous progress in their first year going from feral to formerly feral. Brother Simon and Sister Seal, we love you both, Happy Gotcha Day!

Wow, has it really been a year? Happy Gotcha Day Simon and Seal!

I can’t believe it’s been a year already! Happy gotcha day to you both!

Happy Gotcha Day to both of you……you really hit the jackpot when you were rescued by your Dad. You’re safe, happy, and have your FOREVER.

You two sure to pick the right place to hang out. You are so lucky to have such a good home, with good food, good company and just a great place to be. And we are glad too, since we get to see you a lot. Have a great day.

Year sure flew on by. Happy Gotcha day to both. Sure look relaxed as can be together there. Always fun to trash the bathroom.

Happy Gotcha Day!!! Your love and patience has been so wonderful for these two, helping them to become happy and important members of your household. ♥

Happy Gotcha Day to both of you…you have a wonderful home!

Happy Gotcha Day Simon and Seal! You sure gotcha’d a wonderful home. XO

HH and the Boys

Happy Gotcha Day to you both, and a superb twosome selfie too….. Wow hasn’t that come quick! Thank goodness your peep came along and got everything sorted else you wouldn’t have had, and be having such a wonderful new life!
Toodle pip and purrs and enjoy the celebration
ERin

Happy gotcha day which was the first day of the best days of your lives in your 4ever home,
Simon and Seal
Hugs madi your bfff

Have a super Gotcha Day!

Happy Gotcha Day, Simon and Seal! Wow it’s been a year already—time flies! So happy you both made a great progress in your first year and you are now happy formerly-feral kitties 🙂 Enjoy your very special day!

One year! That year has just flown by faster than the previous year. Happy Gotcha day to you Sister Seal and you Brother Simon.

Mee-you iss it a hole year Brofur Simon an Sisfur SEAL??? WOO HOO!!!!
Happy Gotcha Day to you both. You have both come a long way an mee iss honored to call you ‘furendss’.
***paw patsss*** Siddhartha Henry =^,.^=

Aww how sweet. Those two laying next to each other are really cute. They look quite relaxed.

Happy Gotcha Day from us! May there be many, many more gotcha days celebrations to come. Purrs to you all.

Happy Gotcha Day to Sister Seal and Brother Simon. A year already? That was one very good day for you two the day you got trapped:)

Happy gotcha day Simon and Seal, you both were very fortunate to get rescued/adopted a year ago. Nice non-selfie selfie together.

One year already ? Happy Gotcha Day, Seal and Simon ! We wish you a wonderful day ! Purrs

Happy Gotcha Day Seal and Simon, We wish you a day filled with purrs and licks!

What a sweet story, Happy Gotch day Seal and Simon. So glad you have made such tremendous progress. So glad you two found the purrfect home.
Love from the Chirpies xx

We can’t believe it’s been a whole year either. Happy Gotcha Day, Seal and Simon! You hit the forever home jackpot!!

Happy, happy gotcha day! We can’t believe it’s been a whole year already! Your dad is just pawesome to help out with TNR.

A beautiful rescue story, and, thanks for the earlier Sascha update.

Simon and Seal, happy Gotcha Day to both of you.

Happy Gotcha Day. I hope you give your parents as many smiles this year as you did last year.

Happy happy Gotcha Day brother Simon and sister Seal. We are happy to get to know you and I’m sure you made the house more entertaining.

Hey Simon, I’s, I’s mean we’re so happy you and Seal got gotted. Ya’ know, we’re sure you’ve figgered it out by now, but ya’ll got a great furever. All da luvvin’ any kitty could ever want. Happy Gotchaday to both ya’ gawjus kitties. And big hugs fur all.

One year?!?!?!?
Seal and Simon, we are so glad that you’ve joined the cat blogosphere!
Happy Gotcha Day, sweeties!

Happy Gotcha Day, Simon and Seal!! We are so happy you two found yourselves the best humans to take care of you and the best home to live in! We feel lucky to have you both as friends. Lots of love and hugs from us. <3

What an adorable photo of these adorable kitties. We didn’t remember that they are not related. Sometimes that works out better. They found the purrfect home. Sending all our best wishes and thanks for hopping on their special day. XOCK, Lily Olivia, Mauricio, Misty May, Giulietta, angel Fiona, Astrid, Lisbeth, Calista Jo and Cooper Murphy

Happy Gotcha day you two! Candy, EK and I all started out as ferals. Being gotted is sooooo much better.

Happy Gotcha Day! Where did that year go! So happy it all worked out for everyone!

Happy One Year Anniversary and Gotcha Day to you Brother Simon and Sister Seal! We are so happy you ended up in the loving and amazing family you did and that you have adjusted so well and are soaking up the love, that is just the best story ever!

No way you guys has it been 365 days of fun, adventure, learning stuff and more fun.

Memories of Eric and Flynn