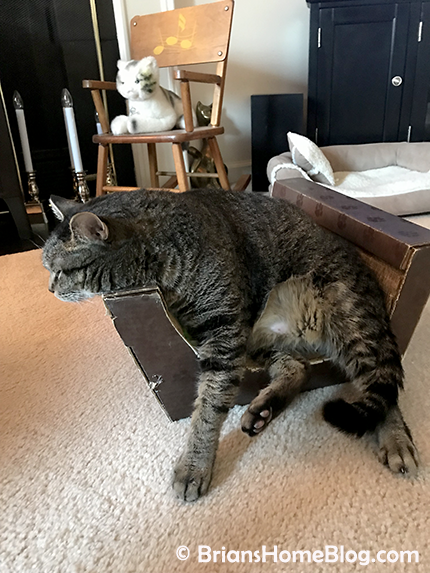 Phew, no wonder I’m tired on Mancat Monday, the entertainment last night was pretty interesting and I was up all night taking in all in.  I’ll bet you’re way ahead of me on what the entertainment was, and you’re probably right.  But, in order to protect the innocent I won’t mention any names of the brother involved.

First there was the toy basket, again.  All of the toys were dumped out and scattered everywhere once again.  There were a few toys in the toy basket that were still in the packaging, so the packaging was chewed open.  Next, there was the toy box.  Yes, we have a basket full of toys and a box full of toys, the same toy box that the unnamed brother fell asleep in yesterday.  Those toys were everywhere too.

Then, it was on to the recliner, the red recliner.  Purrhaps I should say under the red recliner.  You see, the Dad had put a box and some styrofoam blocks under the red recliner to keep two certain young ones from getting under it.  The ends of the box were chewed to pieces as was the corners of the styrofoam blocks.  When the peeps got up they were greeted by itty bitty pieces of cardboard and lots and lots of itty bitty bits of styrofoam scattered throughout the living room and most of the way down the hallway.  A certain brother that I won’t name might have gotten away with all of it except there were tiny bits of styrofoam all in his furs.

That was my entertainment and it really was quite the show.  Even though I enjoyed watching, I’m not sure I could stay awake for an encore purrformance any time soon.  Have a fun Monday everyone, I’m going to catch up on my rest.

That does sound very entertaining, Brian! We wonder who it could possibly be!

MOL! Oh, that is hilarious.

lol he sure knows how to give you entertainment and surprise the peeps in the morning.

Oh Simon, there you go again. Sounds like you had am exhausting night and I bet you will sleep all day. But glad you had fun.

Oh no not the tale tale evidence on the furs. Dang styrofoam is full of static cling.
Hugs madi your bfff

Entertainment? I’d say that is the best!! Especially the telltale styrofoam part. Sounds like a certain brother is not to be outdone my furmom or furdad! – Tom

Oh boy, that brother who can’t be named had quite the busy night!! No wonder you are tired, Brian! At least he must have been somewhat quiet about all that, if your parents got to sleep through the night! 🙂

Well now, Brian, as a cat I’m sure you understand that to a cat, packaging is considered a challenge. 🙂

Hmmm, that brother you aren’t naming, I wonder who that could be?

I’m sure your peeps were thrilled to find all this mess this morning too. Very thrilled. I’l also sure that you can get away with almost anything too. That’s good.

Thanks for linking up.

Have a purrfect Mancat and Awww Monday. My best to your peeps. ♥

Yup! I’d say that was enough to keep any cat exhausted just tryin’ to keep up with unnamed brother. Wait! Brian? You still only have one brother, right?

Whoa! That certainly sounded exciting. I chew on plastic after TW goes to bed and she threatens to “whup the gray offa my butt.” I’d like to see that.

Chiquita and Katie Kat the Mom

oh dear, Brian. i hope your brother didn’t swallow any styrofoam. He must have had a busy night entertaining you while playing trashing pawty all by himself! What a silly boy… Hope you gets a nap in today. -Katie the Mom.

Oh my gosh, I love the weird positions they always get into :’)

Brian, I hope no HBO words were uttered!
And…just imagine…we have TWINS who are of the same energy level as your unnamed brother.

Um…that brother who shall remain un-named…I wonder if any of the sisters thought to give him a whap? They have to clean up the toys. Wait. Sister Zoey is it who cleans up toys?

rut-roh!! That “nameless brother” doesn’t have a name that just MIGHT begin with an “S” does he??? xoxo

Whoever that brother may be, he might need some timeout time in a crate – that’s what happens to us if we disturb the humans’ sleep:)

Our cat bro Bert is also determined. He once chewed through a Chewy.com box to get into the bag of food inside the box. Teeth are in good working order on that guy!

Memories of Eric and Flynn

It sounds like a certain brother who shall remain nameless had a lot of fun last night.

Oh my MOUSES you have your paws full. Paws crossed there are no repeat performances tonight. Tomorrow though, perhaps? Hmmm… Mind if I come over to watch, too? I’ll bring the nip! purrs

Oh boy! bet that boy had fun!
Mum is laughing and shaking her head. We wonder why…
Purrs Georgia,Julie and JJ

Sounds If Master Of Naughtness had a good time!

Your folks need to set up a video camera, it would be fun to watch him being so busy.

Your little bother ….oops, I mean brother is very good at entertaining himself.

You must have been attacked by a crew of rabid raccoons and fought them off.

Oh, what fun was had! High five to nameless brofur.

LLB in Our Backyard

Sounds like some brother had a fun time!
xoxo,
Jakey, Arty & Rosy

Oh Brian, you’ve got your paws full. Fankfully, when mommy goes to bed so does sis Raena. That seems to be the only time we have peace ’round here. MOL Big hugs

Did the entertainer’s name begin with an “S” , Brian?! ;p